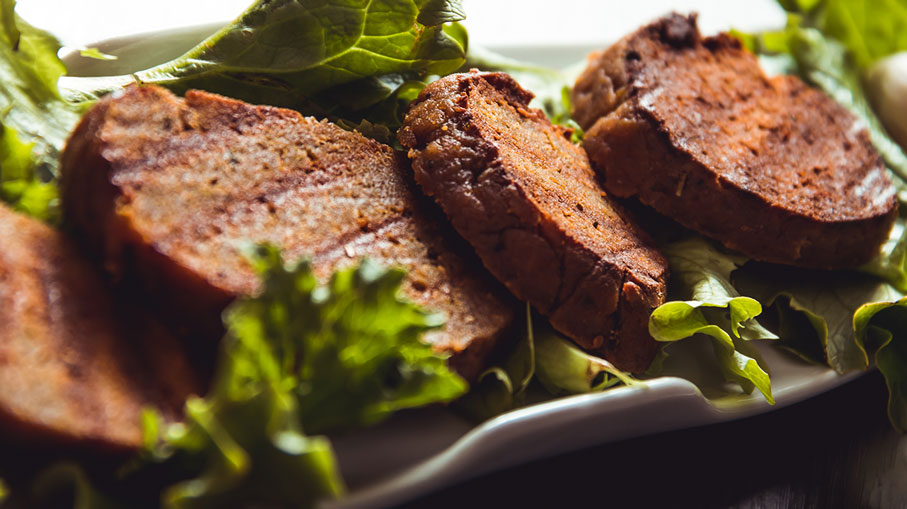 Calling all vegans, vegetarians, and flexitarians – whatever plant-based diet you follow (or try to follow), the likelihood of you recognising the meat alternative seitan (pronounced say tan) is very high. While the vital wheat gluten (sorry, gluten-free peeps) may not look very appealing fresh out of the bag – but let’s be honest, neither does chicken, pork, or any other raw meat – it takes on a whole other form when it’s seasoned, marinated, and cooked.

Plus, it’s incredibly versatile and can be made to taste exactly like your favourite meat dishes. Whether it’s chicken on your stir fry, mince in your bolognese, or sausage on your pizza, it’s a protein source that can provide you with the right amount of the non-negotiable nutrient you need, as well as all the flavours.

So, as an all-rounder when it comes to versatility and taste, what about its health benefits? Is it actually good for you? And if so, what is its protein content, and more importantly, what are the best seitan recipes?

What actually is seitan?

OK, you’ve got to know what seitan is made from and where it comes from before you begin experimenting with different dishes, right? While the plant-based protein is often muddled with other meat alternatives like tempeh and tofu, it’s actually pretty different. Instead of being made from soybeans, seitan is made from gluten – the protein in wheat. And ICYMI, it can also be called “vital wheat gluten” on ingredient lists, so just know that it’s the same thing!

To make seitan, the gluten is isolated in the wheat dough. Traditionally, it was done by rinsing the dough in water to remove the starch. What remained was then a meaty, chewy texture that was able to be pressed into many different shapes. When the meat substitute is prepared plain, it has a neutral flavour that can be compared to plain chicken with a hint of ‘mushroominess’, but just like tofu, it will take on the flavour of whatever dish you choose.

However, unlike tofu, seitan’s texture is eerily similar to real meat and can be made firmer or softer by adapting the pressure during the production process. Many commercial brands sell pre-packaged seitan that is pre-seasoned, too, so the meaty flavour is already there before you prepare it. For example, you can get different kinds of seitan lunch meat slices, including spicy, smokey, tangy, and sweet.

100 grams is a pretty standard measurement, so let’s look at the nutritional data for this amount of the plant-based meat alternative, starting with MACROS:

And even though seitan is mainly consumed to up the protein content, you might as well find out what other health benefits it can potentially provide. Heads up, you’ll likely have to add some extra ingredients to increase the extra nutrients it can give you, but the starting point is there. (Per 100 calories):

As a meat substitute, seitan is pretty good for you. Low in calories and high in protein, and containing small amounts of other minerals including iron and phosphorus, we’d say seitan is a great addition to your diet and a good plant-based option. Plus, it’s a perfect choice for those who have a soy allergy, as many other popular meat substitutes like tofu and tempeh are soy-based.

So, now you know the health benefits of seitan, let’s get to the good bit and show you all of the amazing dishes you can create with the plant-based meat. From quick and easy stir-frys to juicy burgers, you simply won’t know the difference. Vegans and vegetarians, we hope you’re feeling hungry!

With a prep time of 10 minutes and a cooking time of 15, you’ll have this tasty dish plated up and ready to eat in just 25 short minutes! So, how do you make it?

That’s a grand total of 35 minutes (if you take away the overnight chill in the fridge) before you can enjoy your juicy plant-based seitan burger. So, how do you make it?

For all the plant-based eaters out there, Christmas or just Sundays in general can often be a hard time food-wise if your peers don’t understand your dietary requirements, or your family just plates you up a mound of carrot and swede mash with gravy. Well, no more, because this vegan wellington is all meat-free, and may just be the most mouth-watering wholesome dish you’ve ever eaten.

The prep and cooking time is a little longer than the first two recipes (1 hr and 30 mins and 2 hrs, respectively), but it’s so worth it.

Are there any negatives to eating seitan?

Of course, eating too much of anything isn’t the best idea. Whether it be chocolate or seitan. When it comes to the plant-based meat alternative though, commercial brands often up the sodium content to give their products a longer shelf life. According to the US FDA, consuming anything over 2,300 mg of sodium per day puts you at a higher risk of heart failure and high blood pressure, so it’s super important you check the package before you make the purchase.

Top tip: Homemade seitan is simple enough to make and can be truly delicious when done right. This is often a better choice than buying pre-packaged, pre-seasoned vital wheat gluten as you know exactly what is going into the recipe.

What are you waiting for plant-based people? Seitan is a great meat substitute and will provide the texture and flavours of your favourite meaty foods. Whether you’re cooking a hearty roast or a quick stir-fry, it’s got the perfect amount of protein to see your body through the day. Just make sure you eat it in moderation, and you can enjoy a healthy meat-free diet!